The Dangers of Counterfeit Cosmetics

They're everywhere - counterfeit make up, perfumes, creams. etc. But please be aware of what you buy!

And you don't only find them on street stalls but even in shops. I'm talking about fake makeup brand products. And the reason they're everywhere is that some are made so well that it can be difficult to distinguish the fake from the original.

I came across this article in the UK's Daily Mail, which prompted me to write this little entry: The toxic trade in fake make-up: How counterfeit cosmetics containing dangerous levels of arsenic are being sold online to unsuspecting bargain hunters.

"When Mandy Lanham saw her favourite foundation for sale online at a greatly reduced price she snapped it up — after all, few of us can resist a beauty bargain.

The product — called Some Kinda Gorgeous and made by popular cosmetics brand Benefit — was being sold new on eBay by a seemingly reputable seller and duly arrived a few days later.

Having saved £10 on the recommended retail price of £23.50, Mandy, 48, a part-time teacher from East Sussex, was quietly smug.

‘I thought it was a very good price but not so cheap that I was suspicious,’ she says. ‘I’d been looking for presents for my daughters when I spotted it. I checked out the ratings of the seller and all the feedback from customers was positive. The packaging in the picture looked convincing, too.’

Alarm bells only started ringing when the product arrived and Mandy put the make-up on her face.

‘It felt sticky and unpleasant on my skin and I noticed the medium shade I’d chosen wasn’t the same as the old one that I’d bought from a Benefit counter in a department store. It didn’t smell the same either,’ she says."

The excerpt above is taken from the article (click on the link to read the rest of the article).

We see these fake products all the time and the thing I've come to realize is that alot of people don't know they're fake. Even the difference in price doesn't alert them to the fact. They just think they're getting a better deal. I know this because I've had to explain several times to someone I know when they've proudly shown their "lucky find" that I very much doubt the product is an original. The thing is, sometimes, during a sale, you can expect a $50 bottle of perfume to be sold for $30 or even $20. But certainly not $7.99! Much less something that costs $80 plus originally.
In the end, I believe people should do what they want but what worries me is those that really think they're buying the original product, that don't seem to realize they're buying a fake.

However, now it's been stepped up a notch. Now counterfeit products are being sold at rather high prices! I feel these are the most dangerous counterfeiters. They are selling perfumes, cosmetics etc. at just a few dollars less than the original products. So people really believe that they are getting the original product at slight discounts. And, as the above article tells us, these fakes can harm you!

What many don't seem to understand is that alot of expensive products are expensive because of the ingredients used to make them, the conditions they are made in and the tests they've undergone in order to be deemed suitable for use. True, you're paying for the brand name too but part of the reason the brand name holds power is because they've undergone the necessary requirements to be allowed to produce and sell their products for consumption.

When you buy fakes, you have to wonder what the makers gave up in order to produce the "same" thing to be able to sell it at $7.99 instead of $50, for example. Which means you have no idea what is actually in that perfume bottle or lipstick etc., whether it was made in a lab or in unhygenic conditions and therefore, no idea what bacteria or contaminants got into the product during the whole process.
And some counterfeiters have no concern whatsoever for what happens to the person buying the product. They use whatever ingredients they can find in order to create the best copy with the least expense, regardless of whether these ingredients are safe or not. 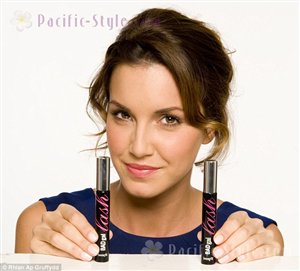 As you can see in the picture on the left taken from the Daily Mail of the popular Bad Gal mascara by high-end cosmetics brand, Benefit, it's hard to tell the original from the fake.
Which means is that now we ALL have to be aware of what we purchase, especially when purchasing online.
There have been cases where even some of the stores were unable to tell the difference and unknowingly stocked fake products.

The Daily Mail article does provide a few pointers of how to spot the difference between an original and a fake.
Of course, the best thing is to purchase from the actual counters of each of these brands or from licensed distributors, especially when dealing with high-end products.

In this case, the budget-friendly brands are actually at an advantage because counterfeiters most likely won't waste their time making fakes of products that are already very affordable. And by budget-friendly, I don't mean the drugstore brands like LÓreal or Maybelline etc. as these brands are pricey in most places outside of the US so there are definitely fakes of these brands.
I mean brands where products start from $0.99.

This article is meant to create awareness. In the end, it's up to you but please be aware of what you're purchasing to put on your skin. I know that it's difficult especially if you're on a budget but still want to use brand products or if the only products available are counterfeit.
Personally, I would choose a budget/unknown brand product over a fake any day. With budget brands or some unknown brands, they're not claiming to be anything else than what they are. They have nothing to prove. They obviously make affordable products from affordable ingredients which they list so buyers are more likely to check the product out thoroughly before deciding to buy it.
But with fakes, they're claiming everything the orginal products claim but with most likely, different and in some cases, dangerous ingredients. They lull buyers into a false sense of security because buyers think they're buying the real thing and won't think twice about it. In their efforts to make the fakes look as real as possible, counterfeiters may resort to using ingredients that mimic the real thing but are harmful. And they definitely won't list these harmful ingredients!